A binary options trader will often come across two important chart patterns namely the rising wedge and falling wedge. Depending on whether the pattern develops after an uptrend or a downtrend, the rising and falling wedge patterns can result in a reversal or continuation of the trend. Thus, a proper understanding of these patterns is highly necessary for a binary options trader to select a suitable contract to trade and time the entry.

A rising wedge is a bearish pattern, which develops when a security’s price makes higher highs and higher lows. It is a common and reliable ‘sell’ pattern with clear indication of entry and exit levels.

A rising wedge pattern can be seen during an uptrend as well as a downtrend. A price reversal is expected when the pattern develops after a prolonged uptrend in price. On the other hand, a continuation of the downtrend is seen when the pattern is formed after a decline in price. The pattern is considered to be complete when the price, aided by a rise in volume, breaks down below the support line as shown in the image below. Additionally, the following rules govern the formation of a rising wedge pattern:

It should be remembered that the reliability of the pattern increases when the base becomes wider. The lowest price within the pattern would be the first target price during the decline.

A binary options trader can purchase a 1min / 30 min / 1hr put options contract soon after the price breaks below the support level (lower boundary). Since the price breaks below a formidable trend line developed over a period of more than three weeks time the probability of an immediate reversal is almost negligible. It should be noted that there is no specific time period for the  of the support level. Thus, a binary options trader should avoid taking positions before the completion (confirmed by the price ) of the pattern.

Another point to remember is that the put options contract should be bought after monitoring for a rise in volume during the  of the support level. Only unexpected news triggering a price reversal can result in a loss of trade (options expire out of money).

A trader should consider buying a double one touch option contract only under the following situation:

It should be noted that a double one touch option contract should be the last resort of a binary options trader as far as a rising wedge pattern is concerned. The reason is that even if the volume is not appreciable during the , still, it does not mean that the momentum would support a strong reversal. The price movement may sometimes remain halted as the broken support level would act as a firm resistance. Additionally, the reward for a double one touch put option would be comparatively lesser than the one touch put option. If the price does not touch either of the levels set forth by a broker then a double options contract will expire out of money. 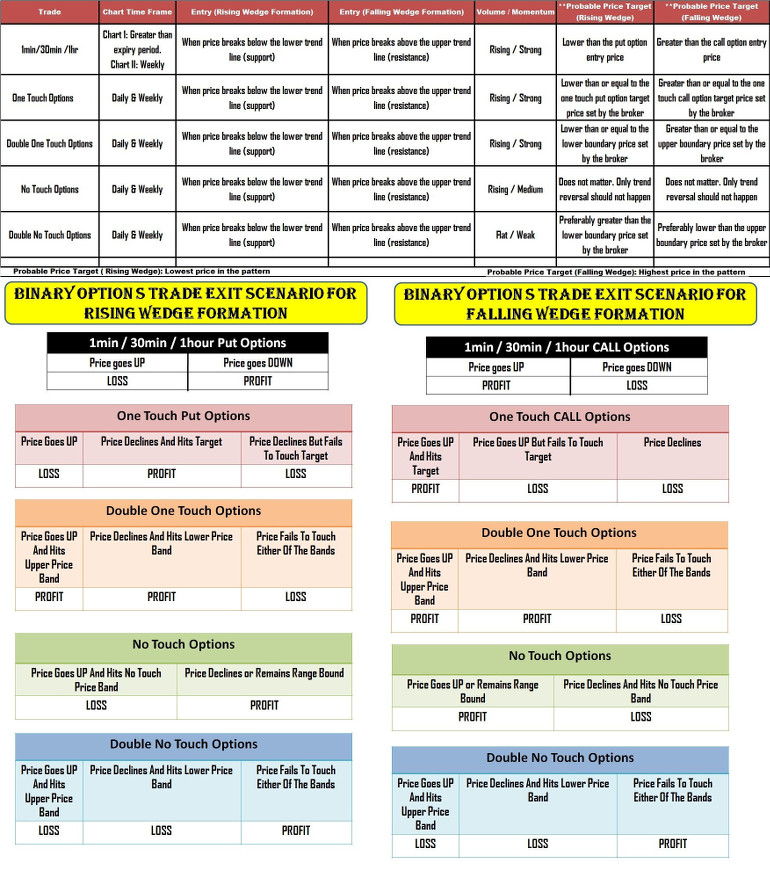 A no touch option is possibly the best contract a binary options trader can choose when the price breaks below the lower trend line of a rising wedge pattern. Being a highly reliable bearish pattern, the probability of a price reversal is negligible. Thus a trader can safely purchase a no touch options contract as soon as the price breaks below the support level. Since there is no price target to achieve, a trader need not anxiously monitor for a deep decline in price. Only high impact news favoring a price rise will turn the tide (options will expire out of money) against the trader.

A double no touch options contract can be bought when the following three conditions are satisfied:

Once the support level is broken the price will remain range bound. Only fresh news can trigger further decline or reversal in price. Since the volume and momentum is not encouraging, a trader can hope that the lower boundary price set by the broker remains untouched or breached following the .

A sudden rise in volume accompanied by a gain in momentum would increase the price volatility of the underlying asset. Such a scenario will render the double no touch options contract expire out of money.

When the price of a security makes lower highs and lower lows, it leads to the formation of a bullish pattern named falling wedge. The pattern is seen during an uptrend as well as a downtrend. If the pattern develops after a prolonged decline in price then it leads to a trend reversal. Alternatively, a falling wedge pattern formed during a price rise results in the continuation of the uptrend.

Similar to a rising wedge pattern, the reliability of the pattern increases when the base widens. The highest price within the pattern would be the first target price after the .