There are two important requisites to successful trading. The first one is the identification of the trend and the second one is the precise entry. To achieve those objectives, successful professionals always suggest beginners to compare the charts of higher and lower timeframe with that of the trading timeframe. The advice is based on the simple fact that a higher timeframe chart always reflects, with clarity, the primary trend of a security. Similarly, minute nuances (accurate high or low) of price movement can be seen clearly only in the lower timeframe chart. Thus, entering a trade in line with the primary trend and near the recent high or low price increases the probability of success. Let us see how the same strategy can be applied in binary options trading.

The strategy discussed above enables a trader to be in line with the major trend and enter near the lowest/highest price. Only a trend reversal in the higher timeframe can put the trader at loss.

To identify the trend, an exponential moving average can be used. For spotting entries a trader can use a fast moving oscillator such as a RSI (relative strength index) or stochastic.

Setting Up a Binary Options Trade

To begin with, a trader should remember that as per the multiple timeframe strategy, the option contract’s expiry time period should be used as the trading timeframe. Thus, for a binary options contract with 30min expiry period, the trading timeframe would be the 30min. The lower and higher timeframe, based on a minimum of 3x multiple, would be 5min and 4H respectively.

Now the entries are made as follows: 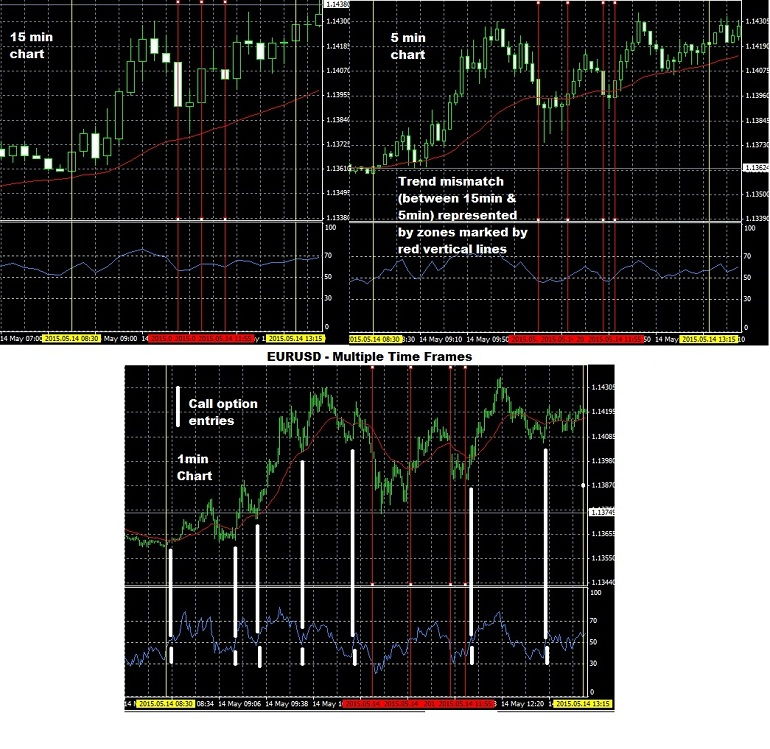 Please note that a call or put option is bought only when there is a cross- over of RSI signal across the 50-level and not when the RSI moves above/below the 50-level.

To succeed in binary options trade not only is the entry important. The price should also stay above or below a level prescribed by the binary broker at the time of expiry. To identify the probable price limit an asset can travel during a given period of time, let us draw a Fibonacci retracement line using the recent swing low to high (uptrend) or swing high to low (downtrend) in the trading timeframe chart. As the diagram below illustrates, 61.8% (commonly referred as the golden ratio) level is where the price normally touches during a retracement from an uptrend or a pullback from a downtrend. 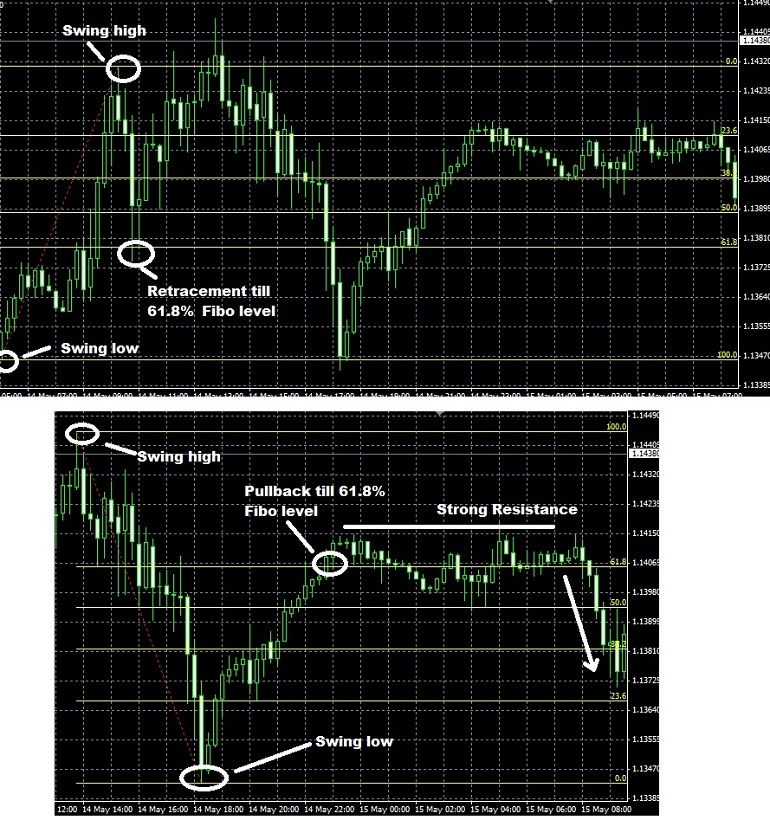 So, even if there is a perfect trade setup, it is better to avoid an entry if the target price of the broker is away from the 61.8% retracement level.

A one touch call or put options trade is done as discussed above. The most important thing is that the target price provided in the broker’s platform should be equal or preferably less than the 61.8% level. This will ensure success provided all other steps are taken correctly.

A double one touch options trade can be traded in the same manner. However, it should be noted that only the target price which lies in the direction of the trend has the higher probability of being touched. Thus, with a multiple timeframe strategy, it is better to trade a one touch options contract, which usually offers better returns.

A no touch options trade is executed in a slightly different manner. The strategy discussed above ensures that price hits a particular level. In the case of no touch options trade, we would wish to see the price deviate away from the ‘no touch’ price level set by the broker. This is achieved in the following manner:

For example, let us consider that a no touch options contract is available for trade with 30min expiry.

It is better to avoid trading a double no touch options contract with this strategy since one of the ‘no touch’ target price will be in the direction of the primary trend.

Once a trader gets hold of the strategy, trades can be executed successfully several times a day, as illustrated in the images, since the primary trend lasts for a longer period of time.