Trading binary options can be profitable only when the trading plan incorporates well structured risk management technique. In this regard, most of the strategies used to trade vanilla options can be adapted to binary options trading. One such strategy is strangle, which can reduce the risk and provide higher returns from trades as discussed below.

The ultimate goal of strangle strategy is to benefit irrespective of the price trend of a security being traded. There are two kinds of strangles namely the long strangle and short strangle.

In the case of long strangle, the process involves buying an  call and  put option (in the same asset) with identical expiry time. As long as the price moves sharply in either of the direction, there will be a net profit. This is because the loss is limited (when a call or put is bought) while the profit is unlimited in vanilla options trading. So, the contract which expires in the money will compensate more than the loss resulting from the contract which expires out of money. The strategy should be employed only when a trader expects a drastic change in the implied volatility of an asset.

However, as we can see below, the long strangle strategy can be applied successfully to certain category of binary options trades.

As mentioned earlier, a strangle strategy involves purchasing an out of money call and out of money put contracts. Fortunately, all binary options brokers allow a trader to take two dimensionally opposite positions.

To begin trading a contract, draw a channel connecting at least three support or resistance lines in charts with time frame below, equal and above the contract expiry period. For example, if the contract expires in 30 minutes then use a 15min, 30min and 1hr chart to draw a channel. By looking at the higher time frame chart the trend can be assessed. Similarly by looking at the lower time frame chart the entry price can be determined accurately. It should be remembered that a channel should be drawn by connecting at least three support or resistance price points as shown below.

The following are the expiry scenarios for such a strangle trade.

The  USD/JPY images below shows how to analyze and create a strangle setup. 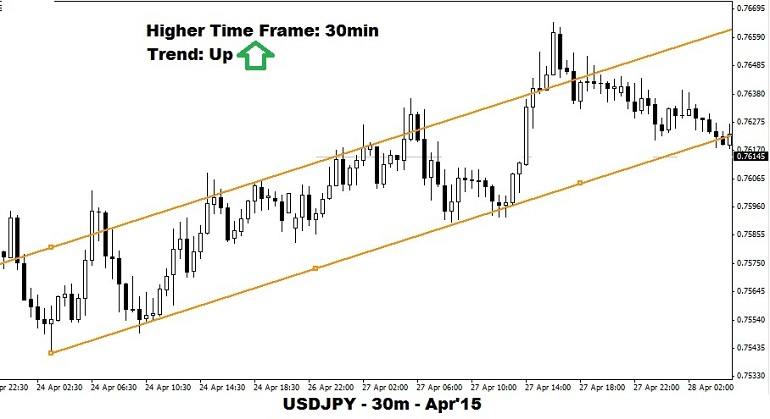 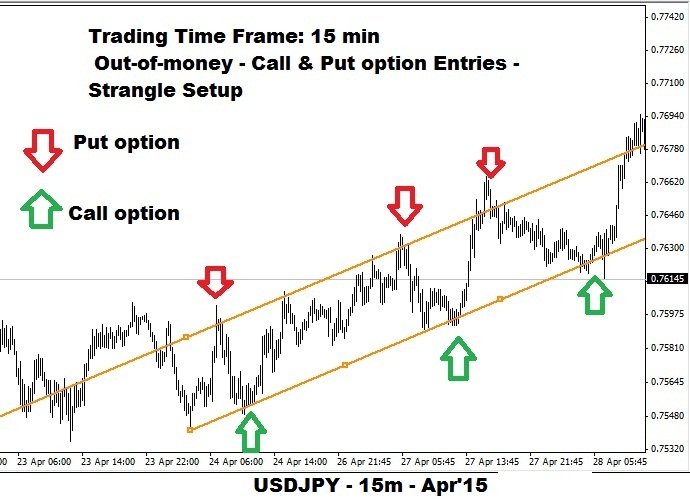 As it can be understood, the strangle strategy is successful in binary options as long as the implied volatility does not change drastically. This is one of the main contradictions when compared to vanilla options. The reason is that reward in binary options trade is fixed irrespective of the distance traveled by the price in favor of a trader.

A strangle setup can be created using a channel, as explained above, in a one touch options trade as well. The only difficulty is that price should touch or pierce the level indicated by the broker. When the asset’s price trades near the lower end of the channel, check for the one touch call option target price provided by the broker’s platform. If the target price is near the upper end of the channel then go for the trade. The same rules apply for the purchase of the out of money put option as well. A range bound market with spikes near the upper/lower channel lines is for this kind (one touch) of contracts.

The expiry scenario will be as follows:

Ironically, unlike a high/low trade, the implied volatility should be high with zigzag moves for this kind of setup to be successful.

A double one touch option is an investment vehicle structured similar to a strangle setup. The trader wins if either of the two (one above and one below) target prices are achieved. Likewise, a no touch and double no touch option contracts are theoretically far different for a strangle strategy to be implemented.

A long strangle is suitable only for experienced professionals who can analyze trend and momentum perfectly. A beginner should use this setup only after a lot of practice in a demo account.