Unlike vanilla options, which are traded in stock exchanges, the profit percentage is fixed in a binary options trade. This indirectly puts the odds against the trader. To understand the validity of the statement, it is a must for every trader to be aware of two most important ratios which affect the outcome of trading in any financial market as such. They are: 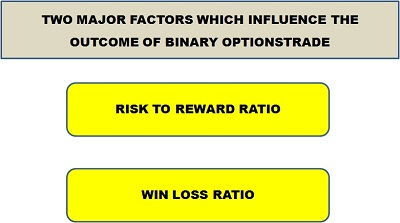 Invariably all the binary options brokers lure potential customers by displaying the percentage returns from a successful trade. However, the portrayed returns only highlight only the positive side of these options contracts. When a trader loses a trade, the entire investment is lost (unless it is a rebate offer). Thus, the potential risk stands at 100% of investment while the returns range from 65% to 92% (depending on the broker). To put it simply, the risk to reward ratio is not even 1:1. 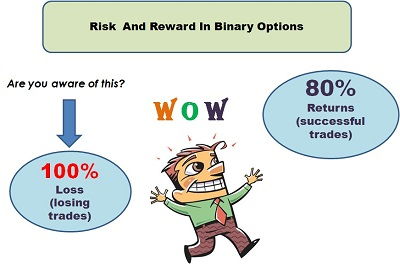 To illustrate the prevailing ratio in binary options, let us assume that a binary options broker offers a return of 80% for any trade that ends ‘In the money’. The client stands to lose the entire investment if the trade ends ‘Out of money’. In this case, the  ratio is 1:0.80. For every dollar invested, a trader stands to gain only 80 cents from a successful trade while the investment gets wiped off from a losing trade.

So, with such a fixed ratio in place, it takes more than a single trade to recover the lost sum. Thus, it is quite clear that odds are pitted against the trader the moment he enters a binary options contract.

Further assuming that a trader has a strike rate of 60% and invests $100 uniformly per binary options contract, the yield from 10 trades would be as follows:

In a case where the success rate of the rate is less than 50%, there will be an erosion of capital.

Even with a 50% success rate and a reward of 80% per successful trade the trader stands to gain nothing from 10 trades.

It is not uncommon to see brokers offering rebates on trades taken by a client. In such a scenario, when the trade ends ‘Out of money’ the broker credits 15% of investment back to the trader’s account. Such an offer creates a cushion effect in the mind of a trader. 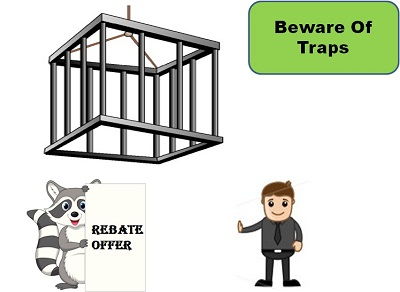 However, what goes unnoticed is that the reward for any trade ending ‘In the money’ is comparitively less than returns (in case of a winning trade) from offers. So, is it really a good will offer which makes a difference to the risk to reward ratio? Let us assess such an offer with a suitable example.

Let us assume that a broker offers 65% reward for profitable trades and 15% rebate on loss making trades. With a  ratio of 60%, the profit from 10 trades made with an investment of $100 each will be as follows:

In comparison to the situation discussed earlier on, the net profit has actually gone down in spite of the rebate offering. Even though broker’s offer looks attractive, ultimately, the risk to reward ratio has shifted in favor of the broker. You can easily calculate what edge the broker has over you, using our calculator.

Since risk to reward ratio is fixed, a trader has only one option, which is to select a reputed broker who offers highest reward per successful trade. Again, the terms should be simple and be in line with other usual offers.

There are also brokers who allow clients to exit before the expiry of the options contract. Under such circumstances, the reward, in case the trade ends ‘in the money’, would be considerably less. However, such a facility allows a client to save capital by making an early exit in case the price action is polar opposite to the position taken. A trader, considering the personal risk appetite, can opt for a broker offering such a facility. Since exit can be done any point of time, this is the only case where the risk to reward ratio is not fixed. The facility is very much suitable for experienced traders who can quickly spot any change in direction of price movement.

There are certain brokers who offer up to 500% return for trades, which end ‘In the money’. However, it would be an uphill task to comply the terms set for realizing such an astonishing return. The difficult terms ensure that losers are several times the winners thereby keeping the broker’s kitty safe.

Thus, over a period of time, a trader can earn consistently from binary options trading by taking care of two factors:

Financial markets can rarely be predicted with 100% accuracy. The stock, Forex and commodity markets are so much dynamic that complex patterns coupled with high level of volatility develops in a short span of time. While binary options do not suffer from lack of liquidity, commissions and taxes, the inherent disadvantage (risk to reward ratio favoring broker) makes it hard even for professional traders to make money over a long period of time. Thus, understanding the risk and reward before entering a trade is vital. Those traders who do not give due consideration to the risk to reward ratio will soon realize how easy it is to blow a binary options trading account.