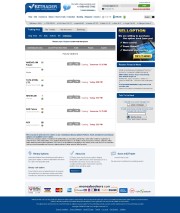 EZTrader is no longer operating as a binary options broker. The review presented below is no longer applicable and is presented for archive purpose only.

Registering with EZTrader is much the same as registering with Global Option. There is no fee for signing up for an account, and you can get a look at the trading area once you’ve opened your account and verified it. You do need to make a deposit to start trading; there is still no demo account available for EZTrader. If you try to place a trade without making a deposit, you’ll be told that in order to continue, you’ll need sufficient funds in your account. We always say this, but if you’re going to trade binary options, you should seriously try to demo test first, even on another platform. Then you can trade live with some better idea of what you’re doing and how your method’s going to translate into real life. It’d be much better if EZTrader had a demo account, but this is still not a common feature among binary options brokers.

The minimum trade size is $25.00, and the maximum trade size per single trade is $3,000, which is higher than many binary options brokers! Not only that, but you can also trade a single option in two separate trades, for $6,000 total. While you cannot exceed $6,000 per security, you may have up to $12,000 in trades running within a given expiry period on multiple assets. For traders who have large bankrolls, this is great. The trade limitations on a lot of other platforms seem much more constrictive. This also makes this platform a better long-term option for traders who are starting small but eventually hope and plan to be making larger trades in the future. You can win up to 95 percent on a trade (that’s not an average), and get up to 15 percent back on a losing trade. There are no trading fees, and the only fee listed on the site is $25 for wire transfer withdrawals.

More than 80 different underlying financial securities are available to trade, but as with Global Option, EZTrader is pretty limited as far as types of options go. Long-term trades are available, but no 60-second options. The only type of trade seems to be Call/Put (High/Low). We did not find any other types of trades like Double No Touch which can give traders more flexibility. It’d be great if EZTrader would work on this aspect of their service, as it’s pretty lacking. The EZTrader interface is intuitive, straightforward, and simplistic, as its name implies.

24/7 customer support is available. Options for getting in touch with the company include toll-free phone, web form, or live chat (note that the chat desk is not staffed on weekends). It’s great that you can contact the company any time of day and that there are multiple avenues you can reach through, since customer service is more important when it comes to investing your money than it is with pretty much anything else.

As far as educational resources go, EZTrader offers more or less the bare minimum. There is a simple, brief tutorial on how to use the site. It comes with pictures and anyone should be able to understand it. There is a section labeled Education, though it contains nothing more than a brief article about binary trading (the contents of which by now you should already know), a glossary with basic terms, and a Magazine. The Magazine is similar to the “Weekly Overview” at Global Option. It’s a series of blog articles that are printed on a regular basis to provide you with some general advice and tips on binary options trading. While it’s a good resource, it’s definitely aimed at beginners, not at experienced traders.

Finally, a quick technical note: for whatever reason, there seem to be login issues as of the time of this review with Google Chrome. The login works fine with Opera, but when we attempted to log in using Chrome, the site simply reloaded without us logged in. So you may want to avoid using Chrome with EZTrader for now.

It’s hard to figure out what the real difference is between Global Option and EZTrader. They run on the same platform, they offer the same assets and the same types of binary options, and their fees, deposit methods, and other mechanics are almost identical. The only differences we found were the differences in educational tools (the Magazine is a bit more useful than the Weekly Overview, but you can access both without being a paying customer at either site), and a slight difference in bonuses. The bonuses at EZTrader seem to be slightly higher.

EZTrader has some real drawbacks in that it doesn’t have anything but Call/Put and long-term trading, but it does offer a nice advantage in terms of the maximum trade size. We’ve seen other sites that only allow you to trade $2,500 at the upper end. That isn’t that useful past a certain point. So if you are a trader who has a large bankroll, you may find EZTrader more useful than some other platforms. If you’re looking for a wide range of binary option types however, you’ll find better brokers out there.