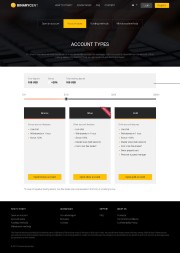 Binarycent is a binary options website owned by a company called Finance Group Corp and operated by a company called Suomen Kerran LP. While Suomen Kerran LP is located in Scotland, Finance Group Corp is based in Vanuatu, a territory with looser regulations. Indeed, this broker is not regulated and accepts traders from the USA.

One word to describe the Binarycent website might be “unfinished.” The entire site has the look and feel of a half-abandoned project. For example, if you check out the FAQ, you will find that it is quite sparse and does not provide much information at all. Some tabs under the FAQ are entirely blank.

This site does not have a lot going for it, and comes across as unreliable and potentially dishonest.

If you decide to open an account on Binarycent, there are three tiers:

The minimum deposit is an industry-wide typical $250. However, you can trade with as little as 10 cents. With minimum trade amounts being closer to $10-$25 on the majority of other binary options websites, this is advantageous for those who do not want to take much risk at all.

Currencies that can be used for depositing funds include US dollar, euro, Great Britain pound, and Russian ruble. Additionally, clients can use cryptocurrencies as their trading account unit. You can make deposits and withdrawals using credit or debit card, wire transfer, Bitcoin, Litecoin, Ethereum, Perfect Money, QIWI, Neteller, WebMoney, OKPay, Alipay, or Skrill.

There is some confusion as to whether a demo account is available. A customer testimonial on the site mentions one, but there is no other mention of a demo account anywhere on the site, and very little reason to believe that there necessarily is one.

Why? Because that same page has other inaccuracies, such as claiming there are more than 100 assets when in fact there are 27, and stating that you can trade stocks, currencies, indices, and commodities when you can actually only trade currencies (including crypto) and commodities.

Binarycent is not exactly feature-rich. Even if you have a Gold account, there are only a few extra benefits, including a personal success manager, prepaid card, and three risk-free trades. In terms of education, there is a set of basic trading videos along with the FAQ. Apparently there are also web sessions.

What about fees? In this respect, Binarycent is not so bad. There’s a minimum withdrawal threshold of $50, and a $50 fee applies to wire transfers internationally. Aside from that, there are no withdrawal fees.

One downside is that there is a turnover fee even if you do not accept a bonus. Thankfully it is only 1×. You can optionally get around it by paying a 20% fee for your withdrawal. Considering I have seen 20% fees for all withdrawals on some other sites, this is not the worst thing in the world, though it is not great either.

If you do decide to trade on this site, you will be on a proprietary platform. The platform itself is attractive enough, and allows you to trade a minimum of 10 cents. There is no maximum trade size.

There is essentially only one type of trade available on the site. The three listed types are Turbo, Intraday, and Long Term, but these are all basic High/Low trades with different expiry times. Other websites provide other types of trades such as One Touch, Range, Pairs or Ladder. Considering that you are limited to only one basic type of trade and 27 assets, this is not the most flexible website for trading binary options.

One odd thing I noticed on the home page near the top is a logo that says, “Best Broker 2015 Fair Binary Options.”

I was chatting with customer service at the time that I noticed this. I will say that for the most part the agent I was speaking to actually did answer the majority of my questions quickly and thoroughly. So the initial impression was not bad. But when I got to my question about the discrepancy in dates between the founding of the site and the award, I got a long delay, followed by, “Can not see it, but I will ask our technical department. Thank you.”

I realized I had not explained the exact location of this award very effectively, so I tried again. At that point, the agent went completely silent and never responded to me again. It would be pretty hard to miss the award logo, and regardless, she had no business simply abandoning the chat line. She should have at least told me again that she did not see it. Instead, she essentially decided to ignore me and hope that I went away.

You can make what you will of this story. I suppose there might be some explanation, but both the discrepancies and the inability of the customer service agent to explain them is a bit concerning to say the least.

For the time being, there really is no reason to recommend trading at Binarycent. I would not go so far as to say outright that this site is a scam, because I do not honestly have enough information to do that. What I can say is that it is incomplete and riddled with inconsistencies, and as such is not conducive to trust in any way. Being as there are quite a few better brokers out there, I would suggest going elsewhere to trade binary options.