The prime motive of a trader should be always risk reduction while benefiting from the price movements in any financial market. In this regard, trading binary (exotic) options in combination with vanilla (plain) options will be very much effective. This is because, contrary to vanilla options, implied volatility has theoretically no effect on binary options.

Thus, traders, as discussed underneath, combine both binary and vanilla option for risk negation as well as optimum realization of profits.

Let us begin with the most elementary strategy with which risk can be limited in options trading. The method involves simultaneously buying a plain call / put option (from an exchange) and a binary option (from a binary broker) contract with a similar expiry period but in the opposite direction of primary (vanilla) trade in the exchange. Alternatively, you can use a binary broker that also offers classic vanilla options (such as IQ Option for example). The contract size is chosen such that the gain from binary options trade matches with the amount invested in the vanilla option trade.

In the worst case scenario, if the asset remains range bound without hitting either (vanilla or binary) of the price limits, then none of the trades (vanilla call plus binary put or vanilla put plus binary call) would result in a profit. To avoid such a scenario, a trader should avoid choosing an asset, which is in the process of consolidation.

Once a trader becomes comfortable in setting up the trades discussed above then a shift to more complex strategies, mentioned below, can be done. 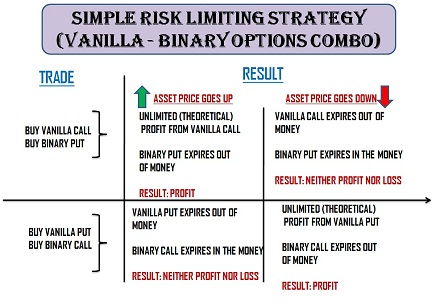 One touch options and vanilla

The returns from one touch options range anywhere between 150% and 500%. The binary options brokers offer one touch options in units of prices. The minimum unit which can be purchased is usually valued at $50 or more. While most of the brokers allow one touch options to be purchased only at the week end (between Friday evening and Monday morning) some allow investments on any day of a week. However, the price per unit would generally be on the high side if bought during a trading day.

An option trader can multiply the profit or hedge the risk by suitably combining one touch and plain options. This can be understood from the following example:

Now, the premium will increase as long as the stock price of Apple spirals upwards. The rate of increase depends on the implied volatility and time decay.

If the price goes downwards then the trader will have no chance but to exit with loss at the time of expiry.

If the trader is not sure with the outcome then a one touch put option (rate: $104) can be bought from a binary options broker. Let us assume that the unit price is $50 and returns are 200% for ‘In the money’ expiry.

Let the units purchased be 5.

On the other hand, if the share price of Apple touches or falls below $104 then the trader would not gain anything from the vanilla options. However, the one touch option would result in a profit of $500. The trader has successfully hedged the losses arising from vanilla options trade.

If the trader is quite optimistic about his forecast then a one touch call option can be bought. As long as the price touches $112/share once, the one touch option would result in a $500 profit. This shields the trader from the negative effects of time decay on the vanilla options premium at the time of expiry.

The entire setup negates the risk of wrong forecast. However, it should be remembered that the trader would a suffer loss from both trades if the price stagnates at the same level.

Additionally, in a case where the stock of Apple loses strength, the decline should be deep enough to reach $104 for the trader to realize profit from the one touch option. If the price trades below $108 but above $104 then both vanilla and one touch option would render useless to the trader. 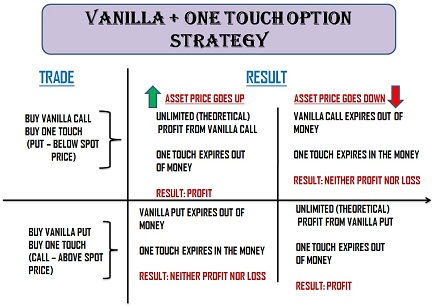 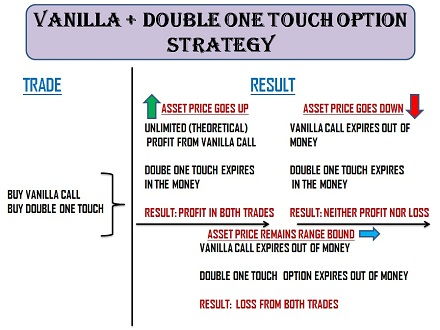 The double one touch option plus vanilla trade also leads to two more scenarios. They are:

Thus, it becomes vital for a trader to choose an asset, which has enough momentum to touch at least one of the limits.

The most important thing to remember is that double one touch options are costlier (or lower yield) than the one touch options. This is because a trader stands to gain from a sharp fall or gain in the price of an asset.

If the trader has bought a 1.1650 vanilla call, to reduce risk, a no touch option for the same (or nearby) 1.1650 level can be bought. If the price hits 1.1650 then vanilla call trade would be profitable and the no touch option will expire out of money.

Contrary to expectations, if the price falls or never reaches 1.1650 then the no touch option will yield a return ranging from 200% to 500% for the trader. The vanilla call trade will not result in any profit. 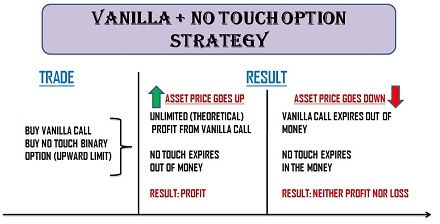 If the market is too volatile then under rare circumstances the price may hit 1.1650 and then fall back or below the spot price. That being the case, both options (no touch and vanilla call) will eventually expire out of money. The vanilla call would gain value initially but the price reversal coupled with time decay would erase all the prior gains.

This is a complex combination suitable only when the trader expects the price of an asset to trend in a particular direction but unsure about the time of breakout. To have a better understanding, let us consider that a trader believes that the downside to the price of crude oil has ended. However, the trader is unsure about the possibility of a break out before the ‘near’ option contract expiry period.

In such circumstances, the trader should buy a vanilla call option for crude in the commodity market and simultaneously buy a double no touch option from a binary option broker. If the price breaks out upwards then the vanilla call option would theoretically offer unlimited gains. If the breakout does not happen and the price remains tied to the subscribed range then the double no touch option would yield substantial returns.

Finally, if the price breaks downwards then both the options would not result in any profit. The strategy, as discussed earlier, is suitable only when the price of an asset has achieved its peak or bottomed out. 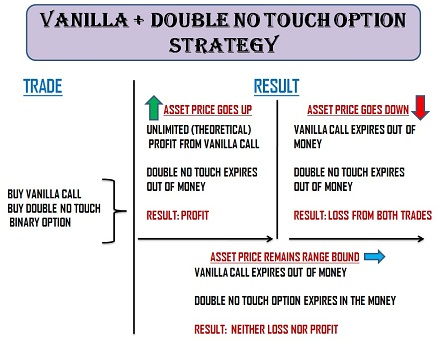 The same strategy is used with ‘boundary’ options where the upper and lower price limit of an asset is .

The opportunities are endless for an option trader who has a thorough understanding of the fundamentals. All that needs to be done is a clear assessment of the risk and reward from various combinations in order to identify the best possible solution (volume of order, selection of strategy and expiry time) for every market scenario. As time passes, a trader will be in a position to develop strategies for trading any kind of assets confidently by choosing the right combination of options.